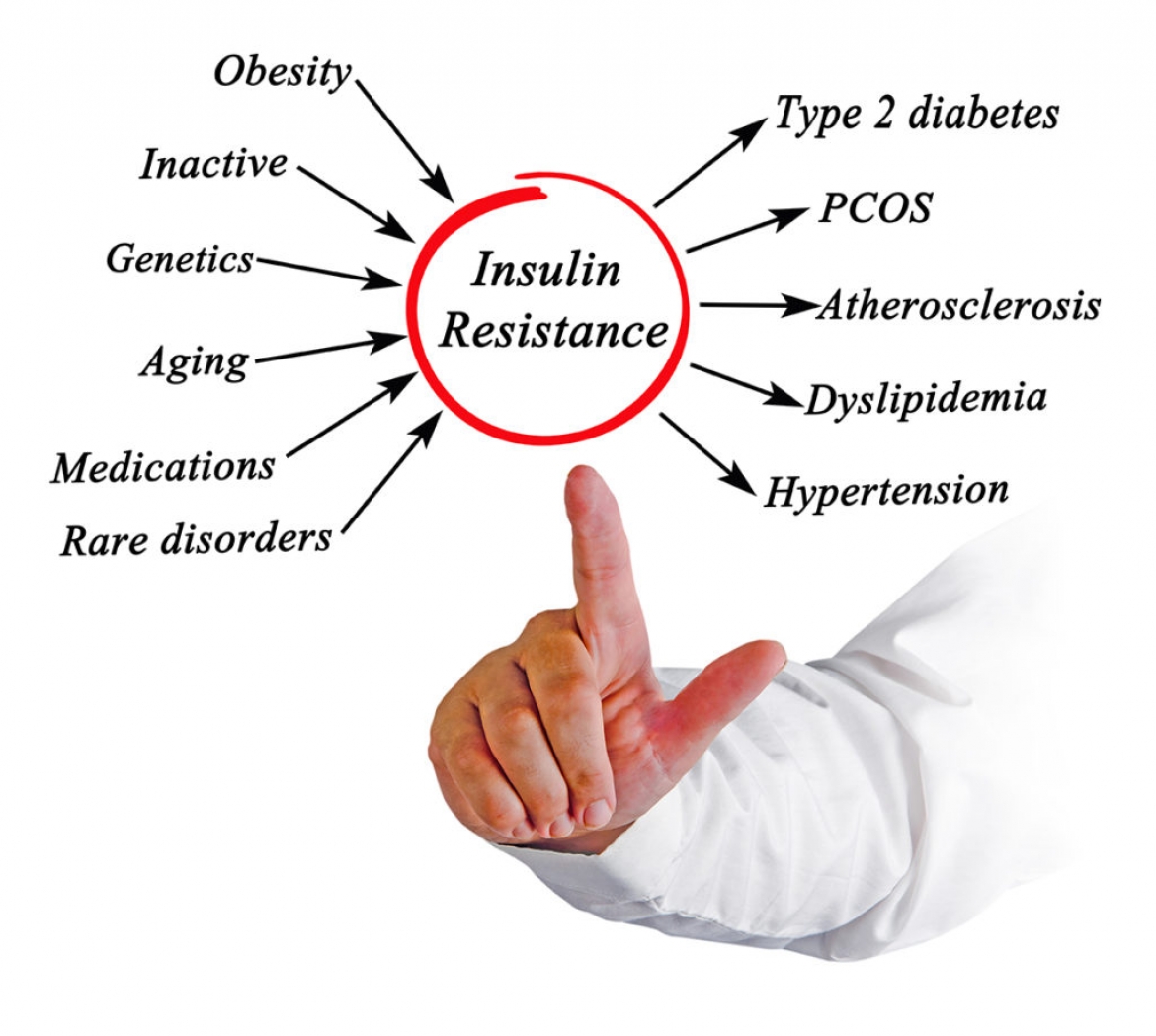 Insulin resistance is a common problem today and so are thyroid-related conditions.

We are well aware of the fact that the function of the butterfly-shaped gland has a strong impact on the overall health and wellbeing of a person.

However, what is the connection between the underactive thyroid gland and insulin resistance?

You'll get an answer to these and many other questions you might have in this article.

What is insulin resistance and why we get it?

Insulin is a hormone produced by the pancreas to regulate the amount of blood glucose (blood sugar) in the body.

Blood glucose is the primary source of energy that cells in the body need to function properly. Without insulin blood, glucose can’t enter these cells.

Insulin resistance is a condition wherein muscle and fat cells do not accept the glucose attempting to enter the cells. In other words, this condition results in lower blood sugar within the body as cells do not absorb the normal amount of glucose.

Some estimates show that over 60 or 70 million people in the United States have insulin resistance[1]. One in three persons aged 60 or older has this condition[2] and, you have to admit, it’s a staggering number. Moreover, 40% of people older than 50 may be at risk of insulin resistance, but the condition can affect anyone at any age.

Insulin resistance is a complicated problem, and the underlying mechanisms and causes associated with it still remain unknown. It is more likely that the condition occurs due to a combination of different causes rather than a single cause or risk factor.

Some causes and risk factors associated with insulin resistance include:

People are also more likely to develop insulin resistance if they eat a high-calorie diet, high-carbohydrate or high-sugar diet.

Chronic and unmanaged stress can also pave the way toward a higher risk of insulin resistance. Men with a waist of more than 40 inches and women with a waist of over 35 inches also have a higher likelihood of developing this condition.

As the condition develops, the body tries to fight back by producing more insulin. After some time, months or even years, the beta cells in the pancreas are worn out and are unable to function properly. They cannot keep up with the ever-growing demand for more insulin.

Is insulin resistance associated with hypothyroidism?

Insulin resistance can jeopardize your health and wellbeing in many ways, as seen above in the article.

But could it be linked with hypothyroidism?

Hypothyroidism is indicated by the underactive thyroid gland and decreased the production of hormones T3 and T4. Since both conditions affect overall health, it doesn't seem too far-fetched to assume they may influence one another as well. However, these aren't just some silly assumptions. Science has confirmed the link between hypothyroidism and insulin resistance.

For instance, a study from the International Journal of Health Science and Research found that thyroid dysfunction alters glucose and lipid metabolism. In fact, thyroid hormones have a negative correlation with insulin.

Lower levels of thyroid hormones decrease the sensitivity of tissues to insulin. Scientists also explain that thyroid hormone T3 and insulin have a synergistic effect on homeostasis of glucose at the cellular and molecular levels.

The most interesting finding from this study is that even a small decrease in T3 can contribute to insulin resistance. Scientists concluded that patients with subclinical hypothyroidism have a higher risk of developing insulin resistance as well as cardiovascular diseases[3].

In the review of evidence on this topic, Brenta G. mentioned that the relationship between insulin resistance and hypothyroidism is not a novel concept. Evidence for a link between hormones T3 and T4 and glucose metabolism appeared over 100 years ago when the impact of thyroid hormone excess on insulin resistance was noticed.

At first, it was thought that only hyperthyroidism could contribute to this condition, but later it was discovered that hypothyroidism has the same effect too.

The impact of hypothyroidism on insulin resistance could be due to the reduced levels of gluconeogenesis leading to the lower output of liver glucose. In addition, hypothyroidism was found to induce a decrease in insulin-mediated glucose disposal, which reverted after treatment.

Another potential mechanism behind hypothyroidism and insulin resistance relationship is a decreased net extraction of glucose and blood flow after a meal in hypothyroid muscles and tissues. In other words, hypothyroid individuals have impairment in the ability of insulin to boost blood flow to the hypothyroidism-affected tissues[4].

As you can see, thyroid hormones have a major influence on how sensitive the cells are to insulin. Insufficient levels and production of these hormones impairs sensitivity to insulin and paves the way to resistance. However, high levels of thyroid hormones do the same thing.

This means that only healthy, normal T3 and T4 are good for your body and insulin sensitivity too. Impaired function of thyroid gland and conditions such as hyperthyroidism and hypothyroidism make you resistant to insulin and put at a higher risk of diabetes and cardiovascular conditions.

Effects of two conditions are similar

Insulin resistance has no apparent symptoms per se, and it's not indicated by some obvious signs like other conditions. That's exactly why it's so dangerous.

We don't feel discomfort, pain, and other similar symptoms and have the false sense of security believing everything's okay, but later problems occur, and things get out of hand. Now you understand better why it's crucial to see your doctor regularly and go to regular checkups.

While insulin resistance does not have some distinctive symptoms, it may still induce some changes such as fatigue, hunger, and difficulty concentrating or brain fog. Here's an interesting thing; hypothyroidism is also indicated by fatigue and impaired memory and concentration among other symptoms.

The relationship between insulin resistance and hypothyroidism is a strong and growing body of evidence confirms it. Multiple mechanisms of action are involved, and more research is needed to elucidate the link between the two conditions entirely. The above-mentioned studies found that insulin resistance was reverted when patients received treatment for hypothyroidism.

It’s important to see your doctor regularly and do necessary tests to get a detailed insight into your glucose and insulin levels, cholesterol, and blood pressure. Bear in mind that insulin resistance may be the cause of difficulty to lose weight. Hypothyroidism is associated with weight gain which is why patients are required to lose weight and keep it in a healthy range.

However, it's not uncommon for people to adhere to all the recommendations and instructions yet their weight loss is unsatisfactory, i.e. it happens at a slower rate and stagnates for a while despite high effort. Reasons behind this problem are numerous, but insulin resistance is one of the biggest obstacles. Managing this problem could make it easier for you to slim down.

Generally speaking, management of insulin resistance requires lifestyle modifications just like the treatment of hypothyroidism. You need to make some changes in your life in order to normalize hormone levels and symptoms induced by their imbalance, but also to prevent complications.

Make sure to limit the intake of carbohydrates which are the main source of blood sugars. For instance, you may want to eat lower amounts of white bread, unrefined sugars, unrefined corn, and potato products. On the flip side, increase intake of foods with a low glycemic index such as foods with high fiber content and non-starchy vegetables.

Don't consider exercise as punishment, but as a significant and irreplaceable part of your lifestyle that can only lead to good things. Plus, exercise is also important for hypothyroidism management.

People with hypothyroidism and insulin resistance tend to gain weight, and although it may seem difficult, it's incredibly important to slim down and maintain weight in a healthy range.

Overweight and obesity can exacerbate the symptoms you experience and contribute to complications associated with both conditions. Weight loss is not impossible. Here’s what you can do:

Both insulin resistance and hypothyroidism are common conditions so it's not that shocking to assume they could be associated with one another.

The relationship between thyroid function and glucose metabolism has been established with more than 100 years ago, so this is not a novel concept.

This only emphasizes the importance of regular checkups at the doctor's office and adequate management of hypothyroidism.

Since insulin resistance does not have some specific telltale signs your best bet to identify the problem is to see the doctor.