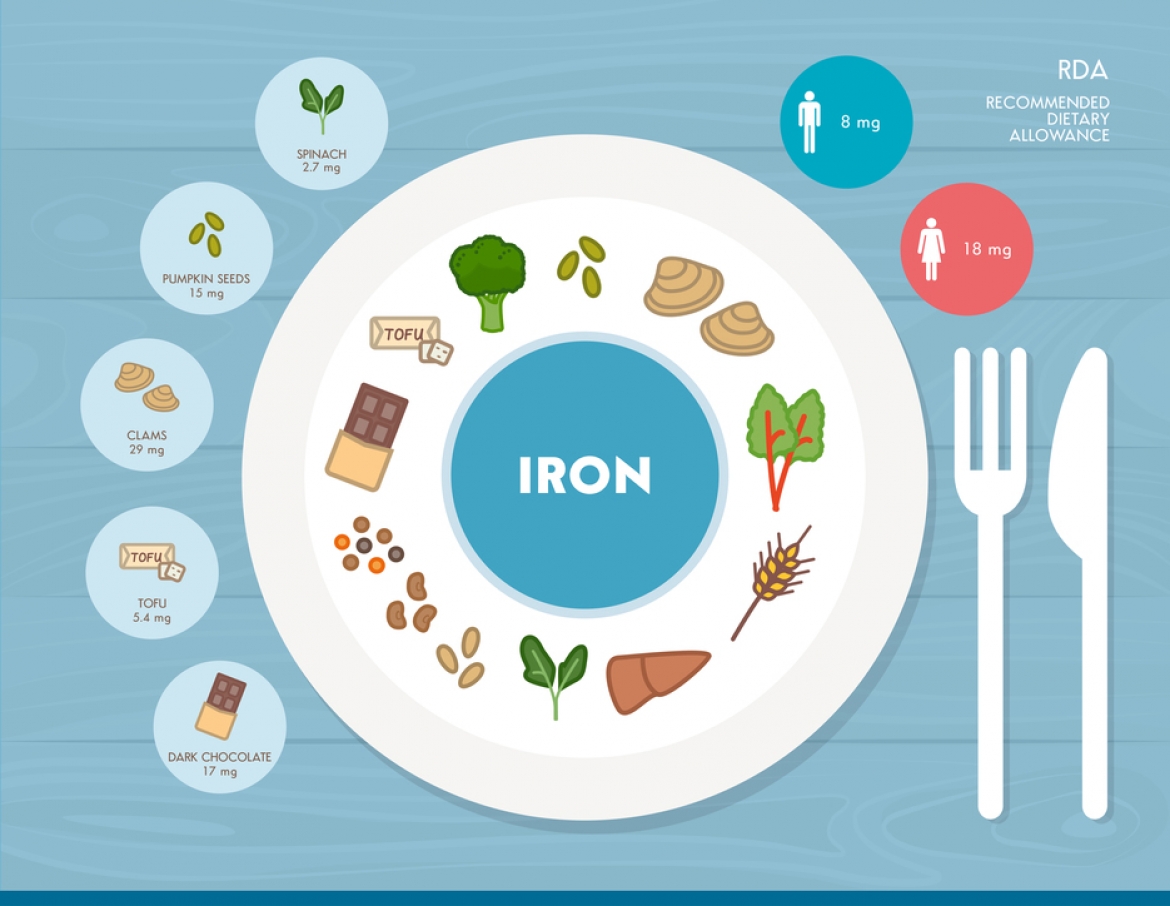 Thyroid disorders are characterized by the over- and underproduction of thyroid hormones.

They are caused by a variety of conditions, from certain diseases to cancerous growths.

However, recent studies suggest that it could also be caused by nutrient deficiency, specifically that of Iron.

Iron is a micronutrient that plays a role in many bodily functions, including DNA synthesis, oxygen transport, and energy creation.

Excretion of iron is regulated by hepcidin, a hormone that prevents dietary absorption when the body’s stores are sufficient.

The recommended dietary allowance for iron varies according to gender and condition. Men and post-menopausal women are advised to take at least 8 milligrams of iron, while pre-menopausal and pregnant women should have intakes of 18 milligrams and 27 milligrams respectively.

Dietary iron can be obtained through the following sources:

Despite the wide availability of iron-rich stores in the market, many succumb to Iron deficiency, which is the most common nutrient disorder in the United States.

It starts with iron storage depletion, where stores are exhausted, but supply is not limited. It progresses to early functional iron deficiency, where there is inadequate iron supply to the tissues that red blood cell production is impaired.

Then comes iron deficiency anemia, or the the advanced stage of the disease. Anemia is a condition wherein hemoglobin levels fall below the norm.

This occurs when there is limited supply of iron to support red blood cell production.

Sadly, iron deficiency anemia is touted as one of the leading causes of disability in children and adolescents. In fact, neonates, infants, children, and adolescents are at a higher risk of developing iron deficiency. In babies, this is due to low iron stores of the mother during pregnancy.

As for children and adolescents, this occurs due to the need for iron during the growth spurts. Women of childbearing age, as well as pregnant women, are at risk of developing iron deficiency anemia as well.

Other conditions and disorders that can lead to the onset of iron deficiency anemia are the following:

Symptoms of iron deficiency anemia include:

In children, iron deficiency can be manifested through the following signs:

Consequently, when the body is unable to excrete excess iron, iron overload develops. It can be inherited, as is the case of Hereditary Chromatosis, where iron accumulates in the heart, liver, and tissues.

It can also be caused by anemias not caused by iron deficiency, such as Beta-Thalessemia, where there is increased iron absorption in the intestines.

Unfortunately, iron overload can lead to the development of other diseases, such as Cancer, Type 2 Diabetes, heart problems, and neurodegenerative ailments.

The Link Between Thyroid and Iron

Thyroid hormone production can be decreased with the intake of soy, cruciferous vegetables, and millet. However, further studies show that it can also be affected by deficiency in Vitamin A, Selenium, and most notably, Iron.

Scientific literature says that thyroid diseases affect hematopoiesis, or the creation of new red blood cells. Deficiency in thyroid hormone can lead to the repression of the bone marrow, as well as lower erythropoietin production, mainly because of the decrease in oxygen requirements.

Likewise, thyroid hormone levels can affect the number of transferrin, which is the blood’s iron transport protein.

When thyroid function is deranged, the following conditions can take place:

Changes in hematological parameters, include Hemoglobin, Hematocrit, Mean Corpuscular Volume, Mean Corpuscular Hemoglobin, are observed in patients as well. So apart from increased or decreased levels of thyroid hormones, these markers are also deranged in people with thyroid dysfunctions.

Clinically speaking, many studies, such as that of Khatiwada et al, have shown that hypothyroid people have lower serum iron concentrations compared to euthyroid individuals.

Researchers attribute this phenomenon to the lower rate of erythropoiesis, or the production of red blood cells. Accordingly, iron is needed in order for erythropoiesis to occur at a regular rate.

It is believed that hypothyroidism brings about various forms of anemia, such as:

It has been noted that iron concentrations can be regained back to normal levels once the hypothyroid patient is supplemented with T3 hormones. That’s because low T3 levels are also seen in iron deficient patients.

Recent studies also show that it can be the reverse; that iron deficiency can lead to the development of hypothyroidism. Anemic people are said to possess higher TSH levels. Such shows the interdependency between the thyroid hormones and iron levels in the body, as such determination of the latter is vital to make a sound diagnosis.

Studies also show that low iron levels can impair the body’s ability to create thyroid hormones, thereby necessitating a further increase in thyroid medication doses. To make matters worse, it can impede iodine absorption. Iodine is vital for thyroid health, as it is necessary for the production of thyroid hormones.

Iron Deficiency and the Prevalence of Hypothyroidism in Women

Researchers believe that deficiency in iron stores is one of the reasons why thyroid disorders are more common in women.

About 2-4% of women in the reproductive age group are afflicted by this disease. Most say that this is due to estrogen’s anti-thyroid effect, however some experts believe that iron deficiency is also to blame.

That’s because women of this age group need twice the amount of iron compared to men. To make matters worse, men naturally have higher iron levels in the body, compared to women.

Whenever there are low levels of iron in the body, chemical reactions that bring about thyroid hormone production are not carried out accordingly. There is a decrease in T4 and T3 concentrations in plasma, and as a result, conversion of T4 to T3 is reduced to subpar levels.

Ferritin, an iron storage protein, reflects iron levels in the body. In hyperthyroid patients, ferritin levels are usually elevated; as such the disease is often a consideration when a spiked serum level is noted.

The increase is due to the stimulating effect of TSH and other thyroid hormones to the synthesis and release of ferritin. Another reason is the condition’s ability to interfere with the metabolism of iron.

Because of the thyroid hormones’ effect on the blood production process, hyperthyroid patients experience as much as a 6% increase in blood volume. Although this is the case, some patients stricken with Graves’ disease develop anemia, which is a surprise to most experts.

To make sense of this finding, a study of Gianoukakis et al suggests that this can occur due to the suppressive effect of the hormone. Some, on the other hand, purport this to be result of other underlying illnesses, such as iron and Vitamin B12 deficiency.

Apart from anemia, hyperthyroid patients are at risk of developing neutropenia and thrombocytopenia. Derangements in white blood cells counts (such as an increase or decrease) can occur as well.

Impact of Iron on Thyroid Management

Due to the role of iron on thyroid health and thyroid health on iron levels, a study by Sachdeva et al suggests measuring serum ferritin in patients with thyroid dysfunctions, apart from the usual T3, T4, and TSH exams.

According to the researchers, such can help in the diagnosis and the monitoring of stricken individuals. This can also determine if the thyroid disorder is brought about by an iron deficiency.

Unlike other blood exams, people who undergo the serum ferritin test do not need to fast prior to the lab test.

If results come back as low, it reflects low stores of iron in the body. This tells that the person has iron deficiency.

If results are high, then the individual is suffering from an illness that leads to the excessive storage of iron in the body. It can also help cement a definitive diagnosis for hyperthyroidism, as well as other diseases such as rheumatoid arthritis and liver disease.

Apart from the Serum Ferritin test, other physicians also recommend patients with thyroid dysfunctions to undergo the following tests:

Given that iron deficiency causes hypothyroidism, and that hypothyroidism can lead to low iron levels, experts are pushing for the prescription of iron supplements alongside Levothyroxine.

However, the supplement should be taken a few hours before or after Levothyroxine so as not to interfere with the body’s absorption of the latter.

For individuals with mild anemia, the recommended dose is 60 milligrams twice a day for a total dose of 120 milligrams daily. After 30 to 60 days of treatment, effect of the medication should be checked through a serum ferritin test.

The said treatment can be continued up to 4 months, and dose can be reduced to 30 milligrams per day depending on the person’s iron levels and the recommendation of the doctor.